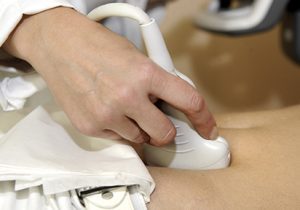 A C scar ectopic pregnancy (CSEP) is the rarest form of ectopic pregnancy (pregnancy outside of the uterus) in which the embryo implants over a previous C section scar. Some risk factors have been suggested to contribute to this condition, such as hysterotomy, uterine manipulation and in vitro fertilization.

In general, the classic triad of an ectopic pregnancy is abdominal/pelvic pain, vaginal bleeding and a painful mass. Case reports of patients with CSEP have been described. Patients usually present with history of amenorrhea (missed menstruation), lower abdominal pain, abnormal vaginal bleeding.

After the patient learns that she’s pregnant through a positive pregnancy test, her doctor will schedule an ultrasound for her which would visualize the implantation site of the embryo.

CSEP is considered a life-threatening emergency because it increases the risk of rupture of the uterine wall.

When detected early, CSEP could be treated conservatively through dilation and curettage or methotrexate. Management could sometimes require surgical removal of the pregnancy and repair of the uterine wall.

Call us or request an appointment with Dr. Gaby Moawad to address your condition.

Scroll to Top
Call Now
We use cookies to ensure that we give you the best experience on our website. If you continue to use this site we will assume that you are happy with it.Accept